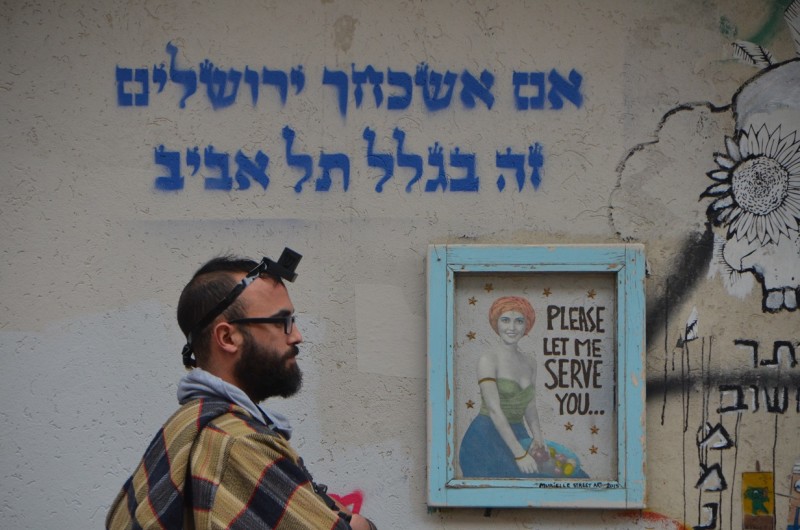 Meet Rafi. “I was born to an Ultra orthodox family and I’m the oldest of 11 brothers and sisters. At the age of 14 I came back home with an earring and coloured hair which caused my mother to faint. In about a week I rented my own place and never looked back.
The first time I came to Tel Aviv I remember telling my self:
‘A MECHAYEH!’
People kissing in the street, and shops open on Saturday. I felt a sense of freedom that can only be described as Marc Renton said, “Take the best orgasm you ever had…multiply it by a thousand, and you’re still nowhere near it.”
That is how much I love Tel Aviv.

“I only knew how to speak Hebrew & Yiddish but that doesn’t get you very far in the secular world. I could read a page of the Talmud and decipher it with no problem but I wasn’t able to read one sentence in English.
It’s a Huge OVERSIGHT of the ministry of education for not enforcing ‘Core learning’ (Math, English & science) in every school in Israel. with an education of the 18 century it’s no wounder why you can get a decent job while you’re getting out of the Ultra Orthodox world education system.
It’s a huge gap that you have to close if you want to survive in the REAL world. I succeed because of my resilience and even though it’s (very) Cold out there don’t think twice – with a little bit of Divine Providence you will prevail.

“After a few years manging my production business I felt very empty so I decided to bail out of The Rat Race.
I felt that I’m ruining after money and not really paying attention to the world out there. I was always fascinated meeting new people and learning about their life so i decided to work in this drugstore.
In the night shift you can really get to know people. There was one customer who would come in 4:00 Am after he finished his sift and we had the most insightful talks ever.
He spoke about his experience in India and I asked him very carefully: ‘Do You think I will manage in India?’ Three months later I found my self Drinking Chai In New Delhi.
Start speaking with on another for real.

You will never know where that conversation will take you.”