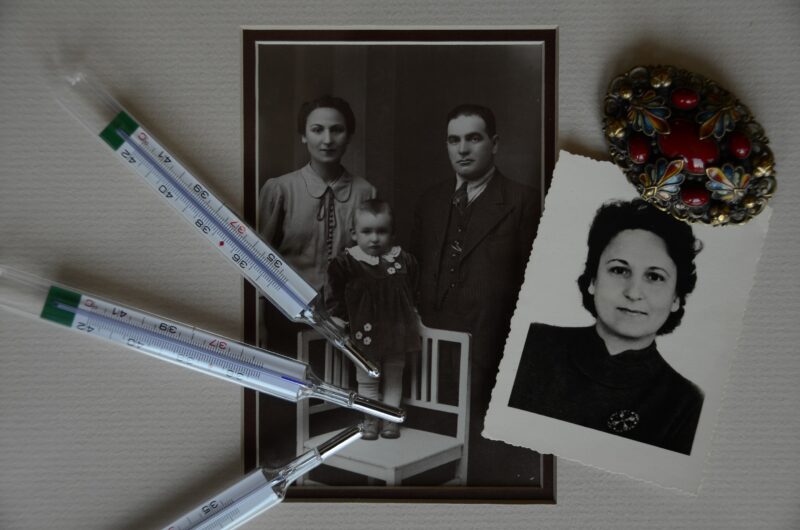 “I was born in Sambor Poland now Ukraine.

When the second world war erupted my parents were more afraid of the Russian forces than of the Germans. My Parents thought: ‘What in the world can happen if we live under the rule of the cultural nation who brought to this world: Goethe, Beethoven, and Kant?

Back then, no one could have imagined the Aktions, the Gas chambers, and the crematorium.

Life in Sambor Ghetto was harsh but they became unbearable when the Germans started with the Aktions. I still remember how in one of the Aktions while hiding in the basement I saw through a crack in the wall how the Germans forcibly took my grandparents away. My mother understood really quickly what the future has in store for us if we get caught so she came up with a plan B that included suicide by swallowing mercury. Somehow she managed to get a hold of a bunch of mercury fever thermometers, broke them, and saved the mercury in two tiny boxes, we were supposed to use when the day would come.

Before the liquidation of the Ghetto, we found a hiding place in the attic of Sambor train station.

It was operated by a righteous polish man. We hid there for fourteen months with few families until we heard the Russian forces approaching. In an attempt to stall the Russians the Germans mined the whole station which turned our hiding place into a powder keg waiting to explode. Having no other choice, we decided to run for our lives and found a shelter at a barn nearby. We didn’t manage to hide for long. A German soldier found us and brought us to investigation at his headquarters. Luckily, my mother spoke German fluently, and the fact that I was a natural blonde helped us in persuading the officers that we are Polish refugees. While in the army base one of the German soldiers put me on his lap, gave me a bar of chocolate, and told me about his daughter that he didn’t see for almost three years, I understood him and felt sorry for him.

People tell me that I and my mother are living proof that miracles happen, but I don’t believe it.

Where are the miracles that were supposed to happen to my other family members? I think it’s all Sliding Doors.

It was pure Kismet that I and my mom didn’t have to break those mercury fever thermometers.”